In 2016, there are many progressive, fresh themes driving workspace design and layout. With many small businesses and large enterprises going increasingly greener, many are making the most of the space they have to lower the cost of overhead. But there’s more to the design trends in the office than smart use of space and being eco-friendly. Most businesses want to save money, but what’s driving the look of office spaces more than anything are the changes to workplace culture, how we work with one another within these spaces, and how utilitarian we can make them while maintaining modern appeal. 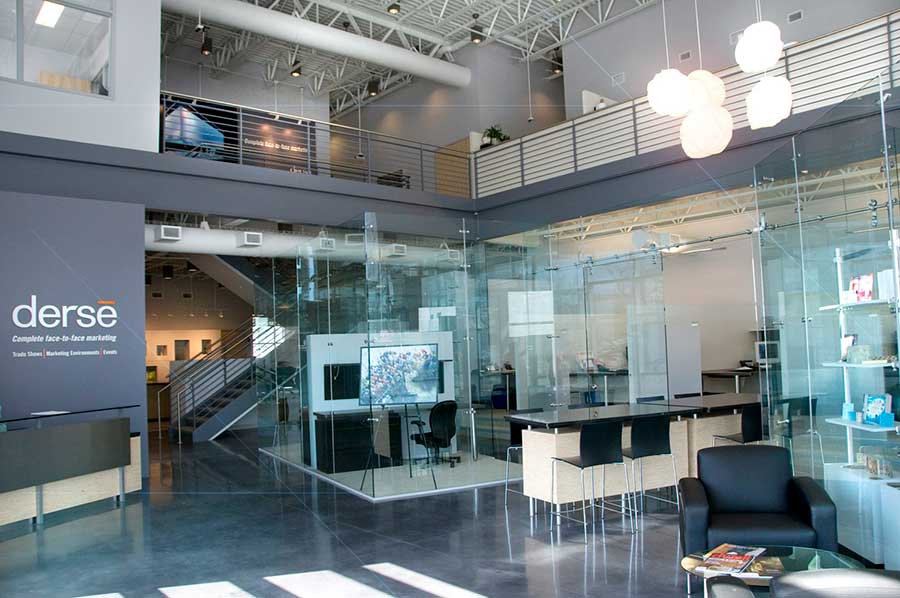 Using glass walls and partitions has been part of many office spaces since the 1960s, but never to the degree we see it today. Just as culture outside of company walls has become more transparent because of social media and generally fewer collective constraints, so too are workspaces literally becoming less exclusivist. With many enterprises of all sizes creating inclusive workspaces that allow for more groupthink, less frequently are we seeing heads of departments sequestered off in some unapproachable corner office. Workers executing everyday tasks and applying themselves to time-critical, one-off projects are clearly visible to their managers, supervisors, or even the CEO.

The fishbowl concept makes the entire office accessible by using more glass doors, walls, windows, skylights, and other ways to allow in more natural light and create a more welcoming atmosphere. With more communication between higher-ups and worker bees, today’s fishbowl work environments foster better communication — the lines between roles are blurred in a way that is advantageous to meeting deadlines, reducing conflict, and lessening feelings of alienation among the ranks. The clearer things are literally, the clearer a team’s objectives become. Accordingly, for many companies across a wide range of industries, the fishbowl concept has been given a 21st century facelift. Transparency enhances workflow, trust, and communication among those in every role and station in the office. 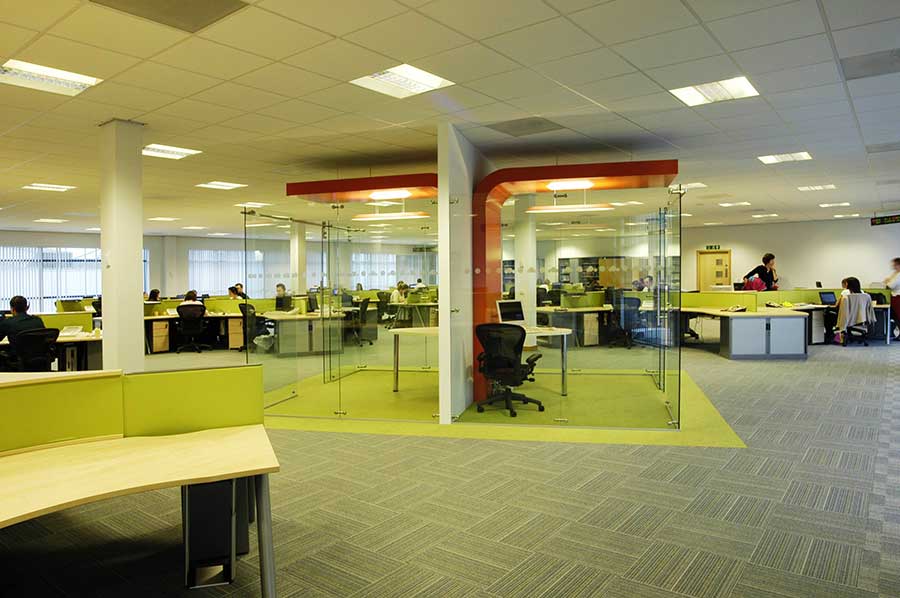 The age of the cloistered conference room available only to department heads and top dogs is over. The office design trend we’re seeing more of as we quickly hurdle toward 2020 are more wide-open spaces where teams can work openly with one another. Many companies have chosen to relocate (or start off in) warehouses or spaces that mimic the warehouse look and feel. This means a lot of remodeling before such a space is ready to be worked in, but some things remain just as they were when the space was a warehouse. For example, rather than creating many small, secluded office suites or simply creating a cubicle farm, warehouse-type spaces remain open for the most part.

One central area is reserved for groups at work, where mingling is encouraged — today’s forward-thinking business owners know that when workers are allowed to communicate, they usually get more quantifiable work done faster. This is because they aren’t shackled to their desks forced to email someone who might be just 20 feet away like office of 10-20 years ago.

With a renewed look at how conference rooms are created and used, the new normal is openness with an option to close off specific areas using large glass walls or partitions that slide smoothly and quietly on tracks. With the option to create auditory privacy using glass walls, workers can still see one another. So while one group is on a call with a client, another group can work on a project, and neither will interrupt one another — but all the light and ambiance maintains its open look and feel.

The Break Room is Dead: Real Kitchens, and Inviting Places to Relax and Eat 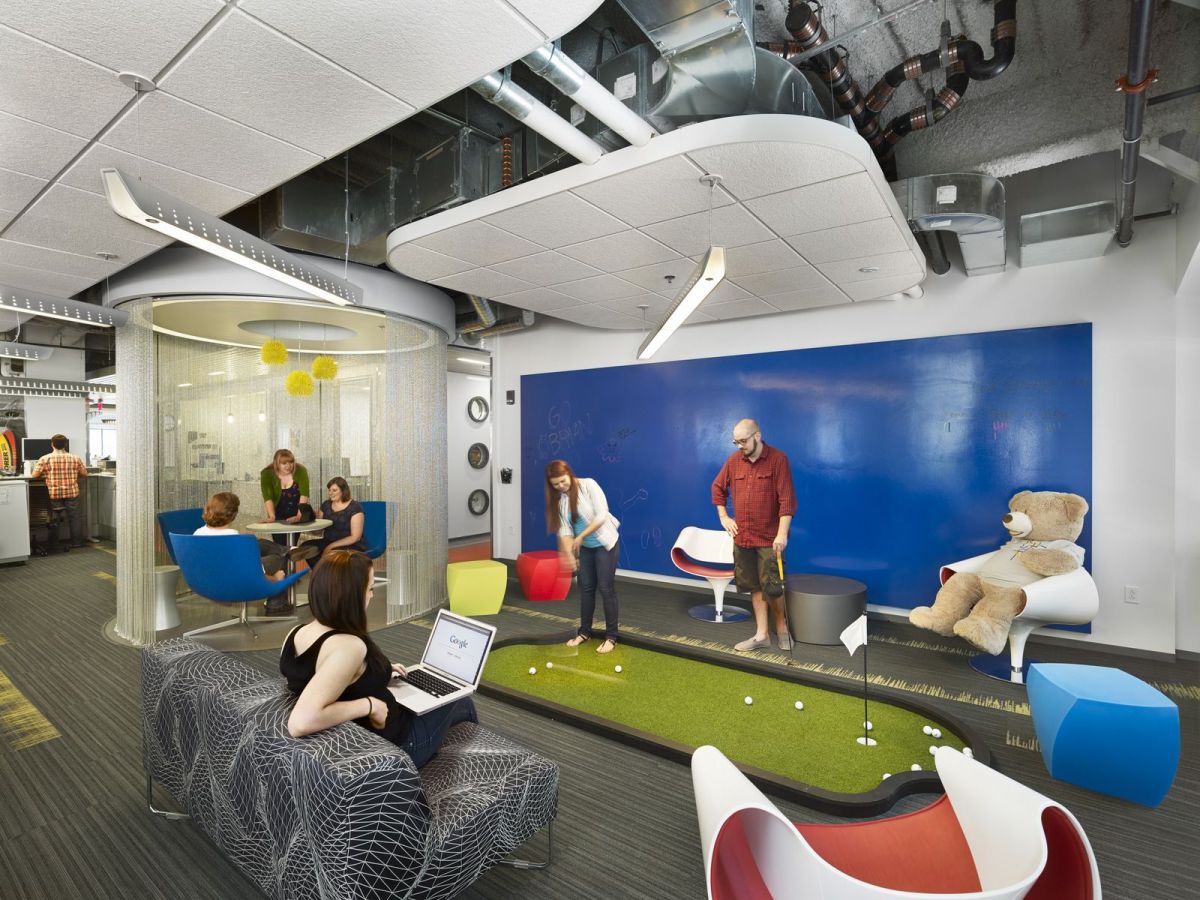 While workspaces stuck in the early 2000s, the 1990s, or earlier office layouts usually have a shut-off break room, the contemporary workspace invites workers to cook in-house so they can enjoy healthier meals during lunch and other break times. Today’s break rooms look nothing like those of decades past. These modernized spaces utilize glass walls and doors, and unlike outdated break rooms that house plastic tables and foldaway metal chairs, these relaxing areas for eating and communing utilize sturdy, vibrant furnishings. What’s more, rather than a simple, plastic coffee maker and a microwave, on-trend break rooms include gas or electric ranges, ovens, and food prep areas. The fundamental philosophy behind allowing these items into the break room is that employee health matters: less sick days, fewer health-related complications, and a more cohesive staff that cooks and eats together are all advantages for everyone from the top down.

The break room of 2016 may have one large butcher block table, or several round tables to encourage groups to continue “talking shop” while they cook or eat. And best of all, the break rooms of progressive fishbowl offices are centralized, and generally, workers aren’t kept to a specific schedule. This “Speed of Trust” sort of allowance from management engenders an environment where employees feel freer — studies show they’re getting more done — and they’re doing it better. 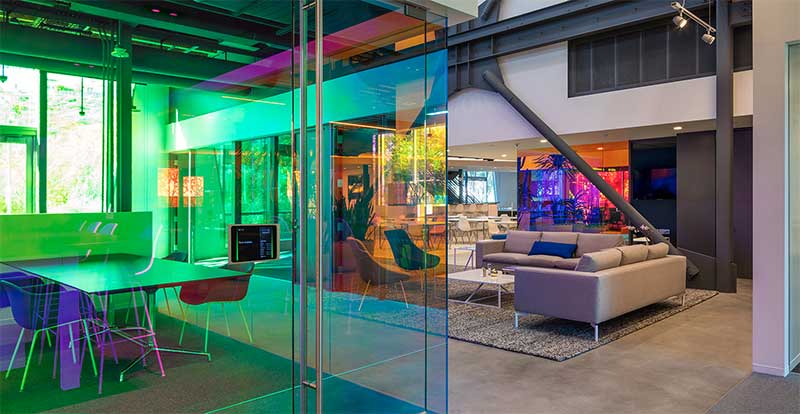 With all the open space and clarity from one work area to the next, another big trend seen at 2016 offices is more plants. Rather than the confined cubicle with perhaps one small plant, today’s offices don’t expect employees to bring their own plants unless they want to. Everything from trees to desk plants, live, hanging greenery, and at some especially progressive workspaces, even a grassy area is part of the living indoor landscape.

Beyond live plants, many offices now use eco-friendly building materials for everything from desks and small partitions to pillars, steps, planters, and more. Materials such as bamboo, cork, repurposed wood, and upcycled metals are all materials that are easier on the planet, make for great interior design, and also do a great job of insulating to keep hot air out in summer and cold air out in winter.

Office design trends in 2016 are leading us to workspaces that are affordable to build and run. They are bigger, brighter, create larger places for workers to converge at work or play, and create a healthier place to get the job done.